New and Notable Words for the Year 2020

Language changes, and has always changed. It’s helpful to think of language as a living thing, that evolves and changes as the need arises. We still speak English, but it’s not like the English of Shakespeare’s time, or English in 1776. New words appear every year in both Merriam-Webster’s and the Oxford English Dictionary, and sometimes the addition of a word can be controversial. People feel very strongly about making a slang word “official,” but I would argue that we should embrace language changes. (I’m not arguing that you need to adopt words into your daily lexicon that you don’t like, just maybe don’t feel anger over a new word.)

2020 added a lot of new words and phrases to our daily conversations. “Social distancing”, “COVID-19”, “community spread”, “herd immunity”, and the abbreviation “WFH (work from home)” were all added to Merriam-Webster’s Dictionary in 2020.

The Merriam-Webster word of the year is Pandemic
Pandemic is defined as an outbreak of a disease that occurs over a wide geographic area (such as multiple countries of continents) and typically affects a significant proportion of the population.
It’s roots are Greek. Pan means “all” or “every”, and ¬ demos means “people”. It’s literal meaning is “of all the people”. The related word “epidemic” comes from roots that mean “on or upon the people”. In general use, a pandemic is an epidemic that has escalated to affect a large area and population. The demos of these words is also the etymological root of democracy.
Source: https://www.merriam-webster.com/words-at-play/word-of-the-year/pandemic 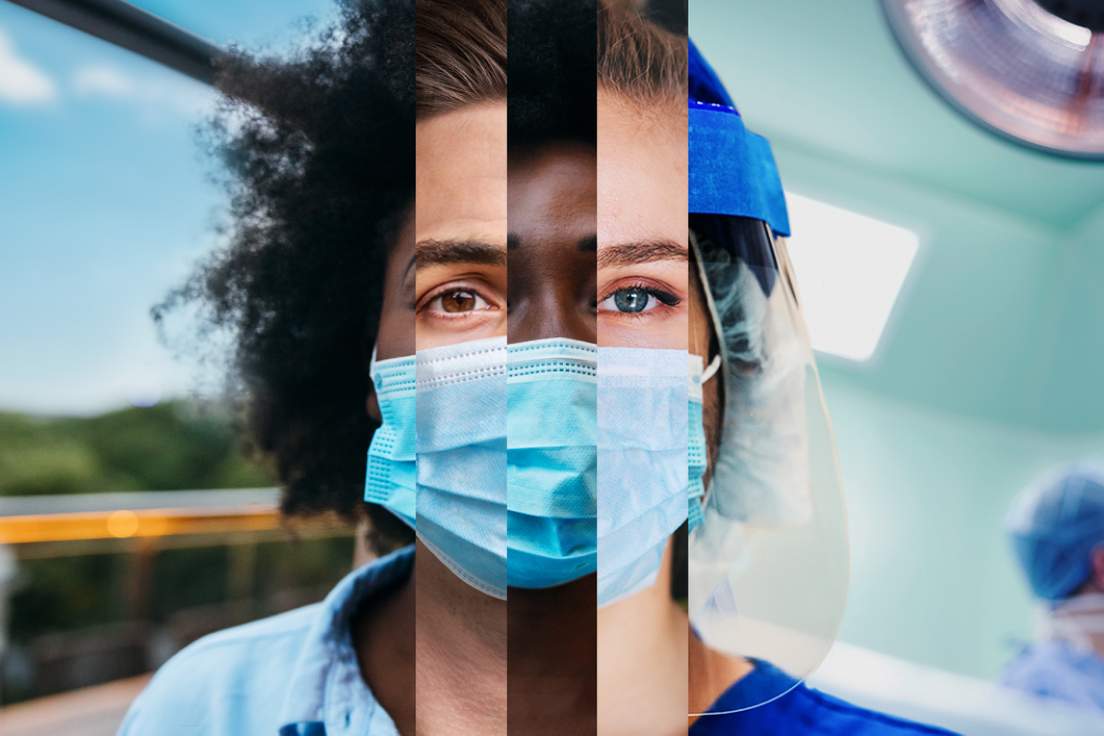 There are 10 other new or notable words according to Merriam Webster this year. The official definition for each word has been shared here, along with the results of a staff poll at the Madison Branch asking what staff members thought the new words meant. I have chosen to share the wackiest answer for each.

Mamba – any of several chiefly arboreal venomous green or black elapid snakes of sub-Sarharan Africa and comes from the Zulu word imamba. Mamba spiked in lookups on the day of Kobe Bryant’s death, looking up the word 42,750% more than is typical. Overall Mamba was looked up 934% more frequently in 2020 than it had been in 2019.
(It’s either a snake or a dance)

Quarantine – a state of enforced isolation designed to prevent the spread of disease. The etymology of quarantine is interesting. It’s first etymological ancestor is from Italian in the 14th century – the term Quarantena meant to isolate a ship to protect the port city from potential disease” was first used during bubonic plague outbreaks. In Italian it means “a period of about 40 days”
(It’s when parents have to stay at home with their teenagers all the time because they’re quarallin’ teens)

Antebellum – from Latin, meaning “before the war”. It has two meaningful definitions in English, one meaning “existing before a war” and another used to specifically mean “existing before the American civil war”.
(That’s my mom southern sister that’s always sayin’ “I declare”)

Schadenfreude – belongs to a class of German borrowings that highlight that language’s penchant for referring to complex ideas in a single, though lengthy, compound word. It comes from Schaden, meaning “damage” and Fruede meaning “joy”
(It’s the comedy troupe Sigmund Freud belonged to before he discovered psychology)

Asymptomatic – presenting no symptoms of disease. Formed in the middle of the 19th century to contrast with symptomatic.
(A Rube Goldberg machine that gives you a sore throat )

Irregardless – the first year irregardless entered the Merriam Webster Dictionary was in 1934. It became one of the most looked up words this year when several celebrities tweeted about it’s existence in Merriam Webster’s entries.
(It’s when you show up to work but don’t want to, you’re ‘ere regardless”)

Icon – a person who is identified as an icon is successful and admired, and frequently also representative of some ideal. It’s earliest use simply referred to an image. Eventually it referred specifically to an image of religious value, an icon being a sacred image.
(When I trick myself into doing something I don’t want to do)

The Oxford English Dictionary, or The OED, updated definitions for, or added completely new entries, for about 500 words in 2020. Among the most interesting added are “oversharer” (meaning the idea of divulging too much about one’s personal life), “chatbot” (computer program which simulates human conversation), “dashcam”, “adorkable” (a way to describe the endearingly socially awkward or unfashionable,
Other notable additions to the OED for 2020:

Anthropause- n. referring to the global shutdown of travel and other human activity and the subsequent welcome consequences, such as a decrease in light and noise pollution”
(When I’m about to say something stupid  I stop myself and think and pause myself)

Adulting – n: the action or process of becoming, behind, or behaving as an adult; (now) esp. the carrying out of the mundane or everyday tasks that are a necessary
(When little kids pretend to be their parents and sit around and day drink)

Bottle episode – n “a television series episode produced using a minimal number of sets, actors, effects, etc. often with a single location and only the main cast”
(when someone’s acting like a baby and needs their bottle)

On-brand adj: conforming to the image or identity that a particular company seeks to associate with its products or services
(what cowboys do with their cattle)

Price-gouge v – transitive to charge a customer an inflated price for something, esp. to take advantage of high demand
(What I’m going to do to Price Sampson when I find him.)

Stink eye n – a look or glare that expresses anger, disapproval, disgust, etc; a dirty look
(What your grandma gives you when you pass gas in church)