A review of The Public

Our volunteer and training coordinator, Dorothie Linton, attended the American Library Association’s mid-winter meeting in Seattle and had the opportunity to prescreen The Public.

Here is her review-

In The Public, filmmaker Emilio Estevez invites viewers to observe a fictional yet plausible example of the struggle to preserve public libraries as one of the last indoor communal spaces. The film tackles this issue through the story of a Cincinnati public library as it and its patrons endure a bitter winter. 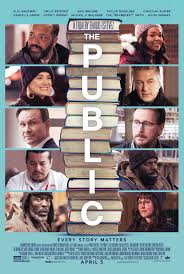 The film deftly depicts the often impossible to maintain balance that libraries across the country face when it comes to a providing service to the homeless population; a part of the population that may more than others depend entirely on the library as a source of not only shelter from the elements and access to the internet, a connection with services and resources aplenty, but as simply a place to be.

Perhaps the most organically appealing part of the film, as least for library advocates, are the voiceover questions that play over the opening and end credit sequences. Taken completely from real questions asked at real libraries, they provide the link that reminds viewers that this film is, though fictional, based on many non-fictional instances occurring every day, where individuals of all walks of life approach their local public library looking for warmth, information, entertainment, and sometimes, a miracle.