Are your eyes crossed from so many horror movies yet? Does your recliner have a permanent outline of your body mushed into it? Does an odor of deep fried corn dogs, popcorn with cheddar cheese salt and peanut M&Ms permeate the air around you like an aura of comfortable junk food favorites? If so, don’t worry about it. It’s all part of the season, a horror movie a day for 31 days. Stay the course. Keep focused. It’s like AC/DC says, “It’s a long way to the top if you wanna rock ‘n’ roll.” You got this. Let’s keep it going. (This list is comprised of titles from both the HMCPL collection, which can easily be put on hold and picked up at any branch through www.HMCPL.org, or available instantly from www.Hoopladigital.com.)

I’ve had the opportunity to contribute to a couple different websites if you are interested in reading some of my haunted Halloween ramblings. My piece on slasher movies can be read here: Slasher Films.  And be sure to check-out the write-up on my all-time favorite Halloween episodes of TV shows like Square Pegs and Freaks and Geeks. Click here: Freaks and Geeks Halloween.

We’re starting off with a quadruple feature, nearly the entire Phantasm series. Phantasm is the story of an alien mortician who comes to earth to steal human bodies, which he mushes down into fun size proportions and ships them off to his dimension to use as labor. He also has an army of Silver Spheres that fly around using an arsenal of Black & Decker attachments to attack people and put their insides outside. HMCPL offers the DVD of the first one and Hoopla offers the original, then parts three to five. These flicks offer fun, bizarre rubber-reality thrills and a unique villain in The Tall Man.

The Evil Dead is a classic story about dumb teens on vacation in a cabin that raises restless demon spirits that in turn possess them one-by-one. Bodily dismemberment is the only way to stop them.  Instead of a “final girl” (the last female character standing in a horror flick) we get a “final Ash,” the character that made Bruce Campbell famous to horror geeks around the world. Evil Dead II is pretty much a remake with the number two in the title. The third film in the series is actually called Army of Darkness and picks up moments after the end of second film. In 2013, a better than expected remake was released, without Campbell as Ash. He returned as the character for three seasons of the Starz series Ash vs. The Evil Dead. The series mixes comedy and horror and director Sam Raimi went on to make the first Spiderman trilogy.

Space vampires come to earth and turn London into a graveyard of energy sucking zombies in Lifeforce. Steve Railsback goes nuts, screaming nearly every line of dialog he has while saving the earth. This was a big, big production with an amazing score and a lot of great special effects. It is based on Colin Wilson’s novel The Space Vampires, adapted by Dan O’Bannon. Event Horizon finds a rescue mission gone awry when a spacecraft returns from a black hole that may actually have been the portal to Hell. This is scary sci-fi for fans of outer space terror.

Ghost House is one of the most deliriously weird haunted house movies I’ve ever seen. Something about a ghost girl trapping a group of people in her house with her fog machine (?). Amityville: The Evil Escapes concerns a lamp from the house in Amityville being shipped to Patty Duke in California, chuck full of demons. Ryan Reynolds highlights the 2005 big studio remake while The Amityvilles Haunting and Terror (respectively) swim around the bottom of the haunted house genre barrel. Cheap thrills for all who dare put their eyes upon the terror! 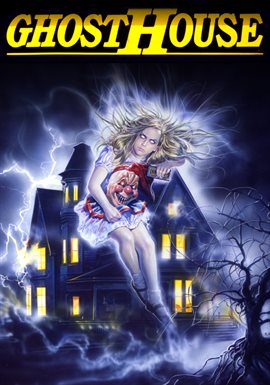 Vincent Price hosts a group of people for an overnight stay in a haunted mansion, a party for his wife whose tastes run toward the macabre. Watch out for the acid bath! Forty years later, 1999’s House on Haunted Hill updates the William Castle classic as a new group of people are invited to spend the night in a new haunted house.

In the 1951 original, Kenneth Tobey is tasked with trying to save the world from alien James Arness who has come to our world by chance and  sulks around scaring a bunch of scientific types. This is a classic that still holds up and must not be missed. In 1982, John Carpenter updated The Thing for modern audiences and delivered what many consider the best remake of all time. Kurt Russell tries to save us this go around. 2011’s The Thing is actually an amazingly executed prequel to Carpenter’s film that is marred only by lousy CGI effects that replaced the intricate practical effects just prior to release. You can watch it before the Carpenter film to see how it compliments it. Mary Elizabeth Winstead tries to save the world. (All are based on the novella “Who Goes There?” by John W. Campbell Jr. The novelization for Carpenter’s film, by Alan Dean Foster, is available here: Novelization to The Thing (1982) from HMCPL.)

This double feature of wicked sorceresses kicks off with House of the Witch, with a group of kids spending the night in a house haunted by the spirit of an evil witch. Who will survive and what will be left of them? Withes in the Woods concerns another group of kids lost in the woods where legend tells of lurking witches. Are they witches…ghosts…or a psycho teen?

Redneck Zombies concerns backwoods good ole boys who make shine in an empty barrel that once housed toxic waste. It delivers laughs and ridiculous amounts of zombie mayhem. It is worth noting that actor W.E. Benson, who plays grandpa, lived in Huntsville for a while and worked at WAAY-TV 31. (I knew Benson from a video store I worked at and one time he ran me over with a John Deere tractor for a news commercial about “Medical Miracles.”) An Accidental Zombie Named Ted looks like a love story between a boy who catches a zombie disease and a cute vampire girl.

On Halloween, a group of college friends go to Hell Fest, a giant amusement park made up of haunted attractions and people in costume. Among the costumed revelers is a psychopath who sets his murderous sites on the friends. Tony Todd, of Candyman fame, is featured. In The Fanatic, John Travolta plays a simple minded fan of an actor he begins to obsess over. This movie totally mesmerized me and had me freaking-out right up to the wacko climax. It was written and directed by Limp Bizkit front man Fred Durst.

Social Media Can Be Murder

A horrible prank on an unpopular girl results in a malevolent spirit crashing a chat party and wiping out the offending goofballs one at a time in Unfriended. It is played out entirely from computer screens. In Friend Request, Laura accepts a friend request that is actually a curse and people on her list of friends begin dying horrible deaths.

We are deep into the Halloween season. Films from the HMCPL collection on DVD or Blu-ray can be put on hold and picked up at any branch. If you pick up your materials from the Madison branch, I do have grab bags of just horror movies made up, so if you want to take a chance and you pick your materials up from curbside, ask for a Halloween Horror grab bag.

For more recommendations for scary movies, scary novels and an interview with bestselling horror author Grady Hendrix, check out the podcast I co-host with Michelle, The Two Librarians Walk into a Shelf. It can be found: Anchor , Apple Podcasts, Breaker, Google Podcasts, Overcast, RadioPublic, and Spotify.